You can download some of my publications on my Humanities Commons page.

For the 950th anniversary of the Norman Conquest I wrote a book in the series ‘C.H. Beck Wissen’ (which is comparable to OUP’s ‘Very short introductions’), where I briefly describe the conquest as well as its prologue and consequences. So you get more than just a book about the year 1066, it rather covers pretty much of the eleventh century history of England. 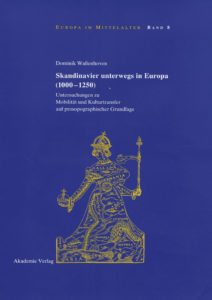 During my time at the University I learned Norwegian and got interested in Scandinavian history. In my PhD dissertation I looked for Scandinavians travelling abroad at least once in their lifetime and put together a catalogue in which I briefly describe these people and their journeys (i.e., a prosopography). On the basis of this catalogue with Scandinavian travellers between the years 1000 and 1250 I analysed the destinations, motivations and routes as well as the development of mobility. Another focus was on the impressions that the travellers brought home. For this question on cultural transmission I looked at a specific example, namely that of Øystein Erlendsson, who was archbishop of Trondheim in the twelfth century. The increasing mobility which can be recognised for the twelfth century was partly due to ecclesiastical structures which were the fundament of personal networks allowing a swift exchange between Northern and Southern Europe. The resulting book was published with the title ‘Skandinavier unterwegs in Europa (1000–1250). Untersuchungen zu Mobilität und Kulturtransfer auf prosopographischer Grundlage’ which is not easy to translate, but might be understood as something like: Scandinavians travelling in Europe (1000–1250): Studies on mobility and cultural transmission on a prosopographical basis. The Humboldt University’s edoc server provides free access to a (searchable) PDF of the book.