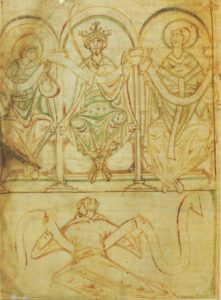 In my current research project I am looking at the perception and depiction of bishops between 950 and 1050, roughly, with a special focus on their role in royal successions. My aim is to overcome the classic view on bishops from the kings’ perspective and as their agents, which has been prevalent especially for the Ottonian-Salian kingdom. I will thereby concentrate on the bishops’ actions, or, to be more precise, on the description of these actions in contemporary sources. Therefore narrative sources are at the heart of the project, above all historiography and hagiography (saints’ lives), but also sermons and legal sources. The aim of the project is to determine perceptions and conceptions of bishops and thereby their position in the society of the tenth and eleventh centuries, both in Germany and England. 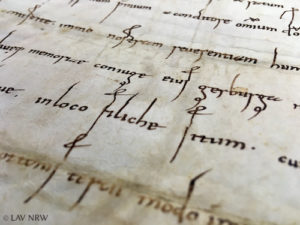 At the University of Cologne and the Ruhr University of Bochum, several scholars are working together on a volume on the palatinates in the North Rhine region for the ‘Repertorium der deutschen Königspfalzen’, a reference work for the royal palaces of the Reich. I am working on two places, Vilich and Schwarzrheindorf, which lie to the north of Bonn on the right bank of the Rhine. Neither place was in royal possession, but various kings stopped there on their travels. For this reason, the places are found in the Repertorium and are arranged according to the ‘B’ scheme. More information on the two schemes and on the project as a whole can be found on Deutsche Königspfalzen digital, a site that was created by the editors of the volume covering Westphalia. There is also an overview of the volumes published so far as a PDF file. 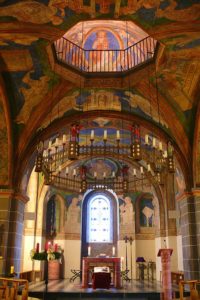 In Vilich, a female convent was founded at the end of the 10th century. The first abbess of Vilich was Adelheid, who was later venerated as a saint, even though her cult only spread regionally (canonisation took place no earlier than the 20th century, in 1966 to be precise). Schwarzrheindorf is only a stone-cast away from Vilich, a little closer to the Rhine. There, in the 12th century, the Archbishop of Cologne, Arnold II of Wied, built a chapel attached to his castle. After his death the church was transferred to a community of religious women. The building is special because of its two storeys – you can look from the lower level to the upper (and vice versa) –, but above all it is known for its well-preserved wall and ceiling paintings dating back to the 12th century.